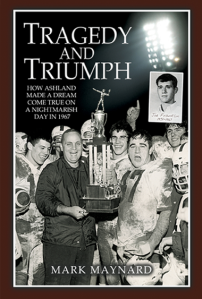 Ashland is honoring its 1967 state champions on the 50th anniversary Friday night in Putnam Stadium. These Tomcats were the first outright championship team since the playoff system that started in 1959.

When the last regular-season game was played in 1967, the Ashland Tomcats looked like it was all dressed up with nowhere to go.

The Tomcats polished off Raceland 26-6 for a 10-1 record, but the prospects of making the Class AA playoffs seemed mighty slim.

Coach Jake Hallum had already done the math and, barring a monumental upset in northern Kentucky, where Fort Thomas Highlands was playing Campbell County, the season was going to end with the game against Raceland.

Ashland finished its district schedule the previous week and stood at 5-0. Highlands was 4-0 with a likely win over Campbell County coming in the last week of the regular season. If the teams were tied at 5-0, which seemed probable, the complicated Dickinson System determined the winner – and the news wasn’t good for Ashland.

Hallum knew it and so did the players. After they finished off the Ramblers, they boarded the bus for Blazer where they dressed. Hallum told them to put the equipment in separate piles in the middle of the room .

For 18 senior football players who had worked hard and did everything the coaches asked of them, it didn’t seem right. It wasn’t fair. Paul Hill, a co-captain, was in denial. He told Hallum he would not turn in his equipment, that he had done everything he was asked to do and he would see him at practice on Monday and stormed out of the dressing room area.

Hallum was speechless, not knowing what to say to Hill or the rest of the Tomcat seniors who it seemed had played their last high school football game.

Hill left the building and the rest of the team kept dropping off the equipment in the appropriate piles. And then came word from a manager with a startling message: Campbell County had upset Highlands 6-0 in a muddy quagmire in northern Kentucky. The door had been reopened for the Tomcats to be in the playoffs.

Hallum couldn’t believe what he had heard and began making calls on his own. Confirmation came that indeed Campbell County, which finished 4-4-2, had pulled off the upset. The Bluebirds (6-4) were stunned and angered over the loss. The following year they would take out some of that frustration on the Tomcats with a 61-0 victory in Putnam Stadium.

But in 1967, Ashland was king of the district and would be home for the playoffs.

The players went back into their equipment piles and gathered up gear but not until after taking a dip in the Blazer pool. By the time they got out, the mud from the uniforms made the pool resemble the Mississippi River.

Ashland didn’t miss its opportunity to shine once the postseason started, defeating Belfry 42-0, Harrison County 20-13 and Elizabethtown 19-14 in the state finals to complete a 13-1 season.

In the western half of the state, an Owensboro team that had gone 9-1 was wondering what might have been. The Red Devils had lost only to eventual Class AAA champion Flaget 20-7 and had eight shutouts in 10 games.

But because of circumstances surrounding the last regular-season game of 1966 between Henderson and Owensboro, which had fights before, during and after the game, the Red Devils would not be eligible to participate in the postseason in 1967.

Owensboro was ranked No. 3 in the final AP poll for all classes. Harrison County was No. 2, Elizabethtown was No. 8 and Ashland was No. 9.

But they were state champions.

Read more about the Tomcats’ 1967 season in the book Tragedy and Triumph. Contact Mark Maynard at mainrod@windstream.net to purchase one.